Images from our early days 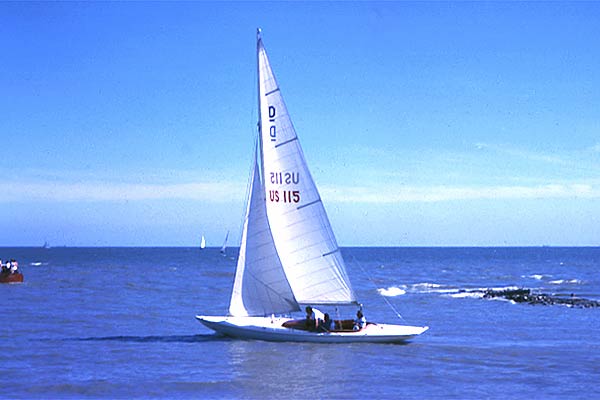 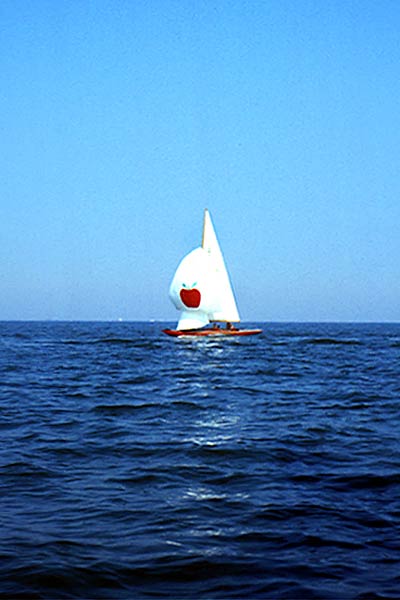 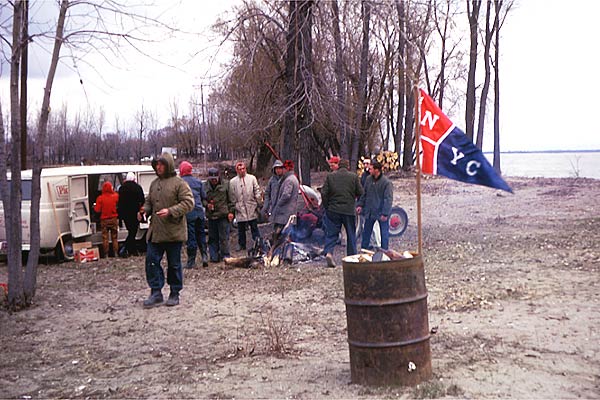 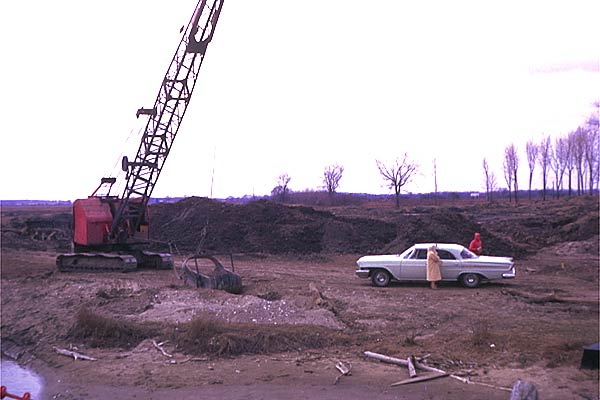 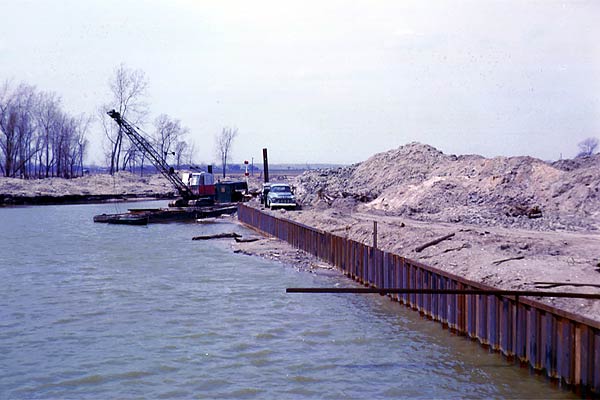 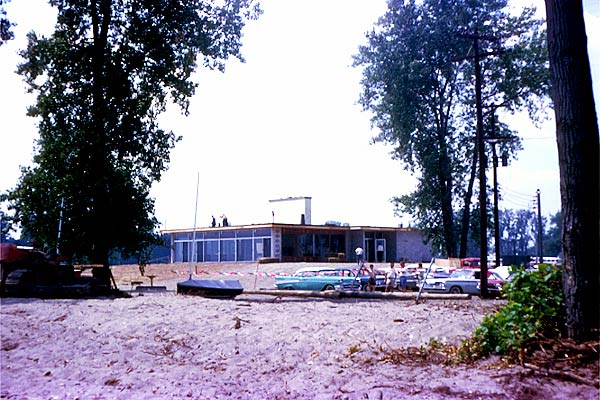 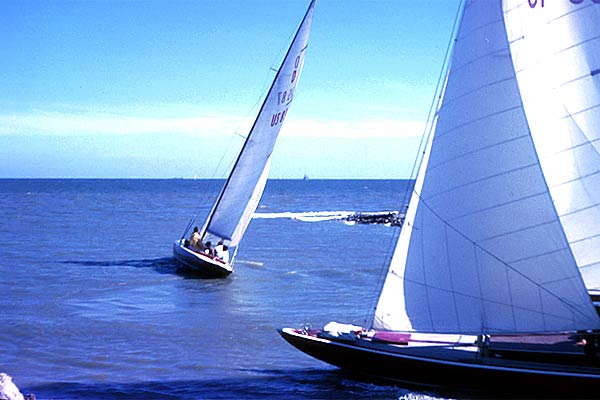 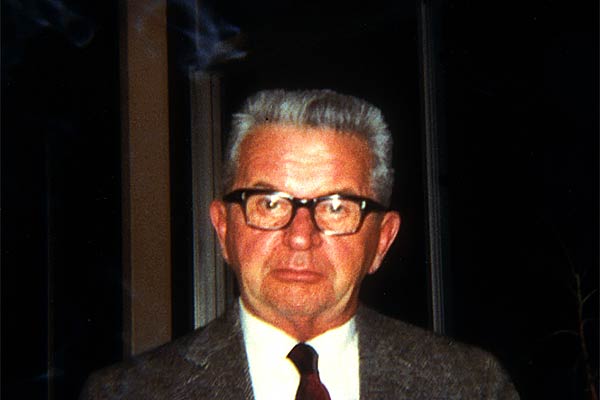 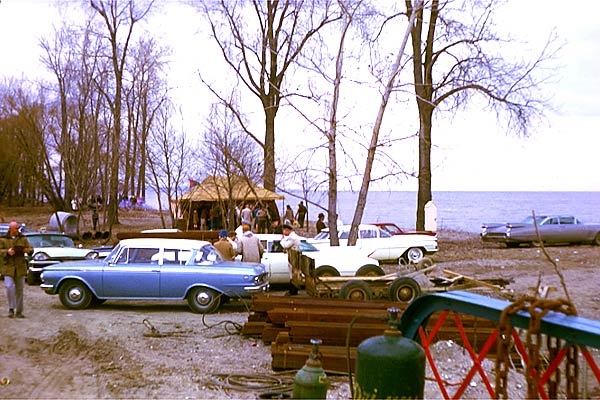 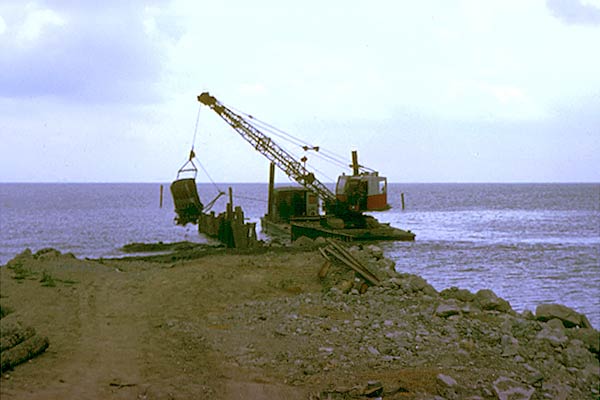 Located on the shore of Western Lake Erie, some eight miles north of the Ohio/Michigan border, the North Cape Yacht Club offers its members and their families an appealing clubhouse and facilities, augmented by a deep water harbor. The 150 boats in club docks reach the lake through a dredged channel shared with the adjacent Toledo Beach Marina. The club's small boat hoists and a boat ramp cater to the needs of skippers who 'dry-sail' their boats. The channel entrance is at N41°49′40", W83°24′31". To remain within the dredged channel, use the privately maintained range lights on a heading of 290Â° true and go between the red and green strobe lights which mark the channel entrance.

NCYC is a "working club", with an active membership composed primarily of sailors. Senior membership is capped at a maximum of 325. Junior, Intermediate and Non-resident memberships are also available. The members provide most of the manpower (and womanpower) to maintain the facilities, prepare dinners and to staff regattas and other entertainment functions. Twice annually, work parties are organized to ready the facilities for the sailing season in the Spring and to prepare for winter in the Fall.

NCYC regularly hosts national championship regattas for sailing fleets. In 2002 we hosted the Lightning Class, in 2003 the Bemis & Smythe Junior Sailing Championships and in 2004 North Cape hosted the Interlake Nationals and Finn Nationals. In 2005 the Sears, Bemis & Smythe Junior Championships returned. In 2006 the Thistle class was hosted along with Hobie 33 class. In 2007 North Cape hosted the Catalina 22 class National Championships. The inaugural Lake Erie Solo Challenge was started in 2008 and has become one of the premier events for the GLSS. In 2009 the Highlander class was hosted. In 2010 the Thistle class returned for their National Championships. Later that year the waters off North Cape were crisscrossed by the A-Class light-weight catamarans as they contested their National Championship. In 2011 NCYC was once again a premier racing venue on the Great Lakes by hosting three National or North American Championship regattas. The Snipe Class crowned a new National Champion and the Lighting Class and J/35 Class crowned North American champions. The high quality, spirit of volunteerism and support of sailing by the members of North Cape was honored by U.S. Sailing with the award of One-Design Yacht Club of the Year for 2011.

The junior sailing program is very strong, with sailors qualifying at district and national levels almost every year. The NCYC Junior Sailing team is typically one of the largest teams at the regional regattas. With over 12 race-ready club owned boats our sailors can concentrate of skills without worrying about the equipment. The training programs include sailcamps for youth who are just starting out through highl-level clinics such as the NCYC Advanced Race Clinic, first held in 2008, which continues annually. NCYC's own Anna Tunnicliffe (2008 Olympic gold medalist) has coached at several of the Advanced Race Clinics.

The North Cape Sailing School (NCSS) works to educate and expose local citizens to boating with seminars and a summer day-camp. The NCSS is a 501c(3) tax exempt organization which can be supported with tax deduct able donations. NCYC employs a Club Manager, bar staff and a custodian. The full kitchen facilities are used by members and outside catering services, for special events. The clubhouse size and layout supports parties with up to 200 people. Members and their guests can lounge on the large patio or the roof-deck with spectacular views overlooking the beach and Lake Erie.

The club is affiliated with two Great Lakes yachting associations, the Inter-Lake Yachting Association (I-LYA) and the Associated Yacht Clubs (AYC). The club extends reciprocal privileges to members of many Yacht Clubs in the area. If possible, visitors will be directed to dockage in slips that have been temporarily vacated by cruising members. The bulkhead just in front of the clubhouse was recently rebuilt and provides water and shore-power hookups for visiting vessels.

The founding of North Cape Yacht Club in 1962, evolved from the efforts of several members of the Toledo Yacht Club (TYC) that dates from 1865. The location of TYC up the Maumee River frustrated the sailors of the one-design Dragon fleet who made the long, back and forth trek to their racing venue in the open waters of Lake Erie and Maumee Bay. Led by Walter Swindeman, Richard Krauss, John Holton, James Bernard and John Turin, in the late 1950's this group began searching for a location where the Dragon fleet could be moored closer to deep-water sailing.

The site they eventually located was a match with the business plan of Virgil Gladieux, a Toledo businessman and entrepreneur. In 1961, Mr. Gladieux was planning to construct a marina on lakefront property he had acquired near the mouth of South Otter Creek that was then a duck marsh and the remnants of the old Toledo Beach Amusement Park. Following a series of proposals and counterproposals, it became apparent that, if the group was represented by a more formal organization with financial resources, Mr. Gladieux would allocate space for it on the north side of the channel that would be dredged to connect his Toledo Beach Marina and lagoon to Lake Erie.

Because the board of Toledo Yacht Club declined to become involved in the project as a sailing station annex or possible future site for TYC itself, the group, with Walter Swindeman as a driving force, sought to organize a new yacht club. The initial lease, dated December 14, 1961, was actually between Mr. & Mrs. Gladieux and five individuals, each of whom personally guaranteed one-fifth of the proposed club's $12,500 share of the cost to dredge the channel and lagoon. These were Orrin Keller, Phillip LeBoutillier Jr., James Bernard, Walter Swindeman and Richard Krauss. On January 9, 1962, the North Cape Yacht Club was properly incorporated and the lease was assigned to it. The club's first commodore was founding member Walter Swindeman who was succeeded, after a 2-year term, by founding member Richard Krauss.

Within a year of its founding, NCYC had grown from 14 original members to 216. With a majority of the labor provided by the members themselves, the club constructed 75 docks, 15 dry storage spaces and a clubhouse with a bar. Five regattas were planned for 1963. In 1971, the club purchased the previously leased site for $125,000 with the proceeds of bonds sold to its members. Significant expansions of the clubhouse occurred in 1974 and 1984.

Total membership is now more than 400, including other membership categories such as junior, intermediate A&B, non-resident, emeritus and honorary. Reflecting its founding heritage, the majority of members own sailboats. And many of the club's powerboats are operated by former sailors who love boating but wanted to abandon the rigors of hauling halyards and grinding winches. The small, one-design sailboats that represented the foundation of the club in 1962 have generally given way to larger cruising/racing sailboats.